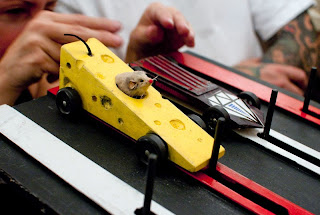 Life doesn't come in a kit


If I remember correctly, they came in kits, and you had to register long before the race so that your materials would come in the mail on time. In the delivery box were four wheels, four hubcaps, two axels, and a block of wood, and as a boy scout, your duty was to engineer a derby car using only those materials. I'll be the first to admit I was never the best boy scout, but the annual pinewood derby races were the one area I really shined.

We had the perfect design, my dad and I. Most of the time we would even get two kits. The first one would be a trial model that we could try out crazy new ideas on: spoiler, forked wedge, extremely narrow wheelbase, extremely wide wheelbase, inverted wedge, etc. Then we would dispose of the terrible ideas (usually his), and take what worked well (typically mine), and incorporate the best format into the final design. *Note: the spoiler thing never works.

We were allowed to use basic tools like drills, saws, wood chisels, and knives to shape the simple wood block, but it was the paint job that really made our cars into objects both feared and revered by other scouts and scout dads alike. Often we would devise a name for the car - something like "The Flame" or "Blazing Rocket," you know, something really terrifying that I could paint on the side in red letters.

As a kid who grew up loving the names of exploding fireworks, I'm beginning to think naming them was my favorite part. I would even go through the trouble of pulling out a bunch of blank printer paper to doodle on so I could get the letter style I wanted. My hang-up in designs, now that I think about it, was that we never had the colors of paints like I had the colors of crayons... parents take note... 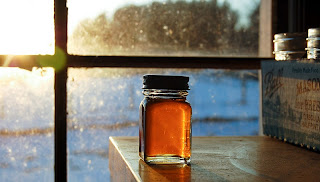 The current of acer saccharum


Rain fell upon snow - the drops descending from a heavy, grey sky. And when they struck the trees they stuck and collected to build limbs of ice. In the woods the maples, basswoods, birch, and oaks stood in transparent tombs of wet crystal. By night they seized and froze in winter's dying grip, by day they dripped silver; in vertical streams the ice trees thawed under a strong southern sun. The bark beneath weathered both extremes, peering out from below its weeping cast to watch as the men came and went.

They came in pairs, the men. They trudged through the old crusted snow of woodlands with armloads of hard metal tools. They took turns choosing trees; each played judge and jury both. From tree to tree they worked, breaking the rotted ice away from those trunks deemed large enough, leaving those who were yet too young. They skipped oak and aspen, ignored basswood and firs. These men had one prize in mind. Their quest was for only the sweetest drink among the hardwoods - the current of Acer saccharum - sugar maple's sap.

With their iron tools they bore into sugar maple's trunks. Into these wounds they placed their concave beaks, their metal straws to sap on maple's stores. Man's beaks were unlike other creatures though. Once pounded into maple's pulp, man's beaks stayed put day and night, for as long as it took maple's lifeblood to run bitter, and disinterest the sugar-craving tongue of mankind.

Once each year sugar maple made this tribute to man. Before the new year of spring, maple offered her sweetest gift, the store of her winter roots. Her sap ran as sugar water when the birds returned to seek nesting, when bears crawled from their dens, when geese came back to the river water, and when squirrels began to emerge on the oak ridges. These signs the men had read, and so their thirst returned each year.

A good dose of the boogies

This past weekend I attended the Roots and Bluegrass Festival in River Falls, where I boogied all day and all night to banjos, fiddles, acoustic guitars, mandolins, upright bases, washboards, and ukuleles. I stomped and shouted refrains and chain vocals, slapped open-hand on thigh, and watched regional and local acts alike pour their hearts out over riff after riff blazon with thirty-second notes. To summarize, things got sweaty quick.

The specialty of boisterous bands like "Pert 'Near Sandstone" and "Boys n the Barrel" were different than those harmony driven acts like "High 48s" or "Ditch Lilies," yet they came together to make the event broader and more complex than any of them could have been alone. Putting all the different acts together gave the entire three-day event much more flavor, and it drew people in to see different acts that may have otherwise been overlooked.

The bands played in the bars and restaurants lining main street, 15 acts in seven locations, and there was never a dull moment. People of all ages and walks of life came out to hear rough and tumble music, be part of a folk movement, and support talented musicians that have day jobs and live next door. 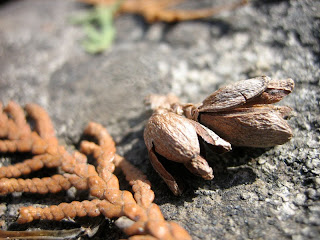 
"You could be Scandinavian…you look Scandinavian," Ben told me from his pleather computer chair that sat across the living room. I paused and tilted my head, considering what I should say to that.

"That's probably because I am…Scandinavian," I admitted from the recliner.

"I guess I just don't remember your cheekbones being so high when we were kids," he admitted after we'd both stopped laughing. "And your hair stayed more blonde than mine did. The Croatian came out in me as I got older." I glanced over to his wife at this point, wondering what the Swedish native thought of our second-hand knowledge of Europe.

Ben and I had grown up together on Seventh Avenue South eons ago. We lived next door to each other in a hotbed of creativity. It was a place where we'd play games that were made up as we went, where we built sand castles and motes and all sorts of contraptions from sticks and pine cones in the yard. Back then, we engineered spaceships, excavated dinosaur bones, and created secret written languages. He was always the careful intellectual while I was the reckless risk-taker, and together there were few adventures we could not topple.

Now though, we were adults in his living room, catching up on old times after enjoying a dinner together with his wife. I was no longer covered in mud and holding a stick, and he was no longer showing me how to transform Optimus Prime (though I'm sure he would have if I’d asked).

A lot of things had changed, but many more had only morphed...