A tradition steeped in pine pitch

Over last weekend I took part in something that's become a bit of a Thanksgiving tradition during the seasonal get together at my paternal grandparent's house - harvesting Christmas trees. You see, Grandpa Carlson has been raising balsam on his back 40 for probably 20 years now, and as it turns out, he's got more trees in their prime than he can handle on his own. After all, the process of cutting, trimming, displaying, and selling each tree begins to add up quickly when you're moving several hundred of them in a month.

The plan was to arrive early on Friday morning with saws and shears in hand. However, the previous night's snowstorm kept my brothers, sister, and I at home until late morning and the roads were clear of ice and snow. By the time we arrived in Nekoosa, it was almost mid-day and the older generation had already put in a full first shift.

As we pulled up to the house, we were greeted by rows, piles, and stands of freshly cut, eight-foot tall balsam firs strewn about the yard. The piles seemed to stretch on as far as the eye could see - an endless terrain of raw Christmas product, still seeping fresh pine pitch into the chilly November sunrays.

Beyond the bountiful harvest, I could see Grandpa's truck and trailer returning from the field with another load. By the time I walked out to them, my dad and two of my uncles had already parked on the edge of the ever-expanding drop zone and began unloading the Christmas cornerstones one by one.

They tossed the trees over the edge of the trailer, rolled them over the grass, and repeated the grunting display of brawn until the truck and trailer were depleted; brow wiping ensued.
Read more »
Posted by Unknown at 9:00 AM No comments: 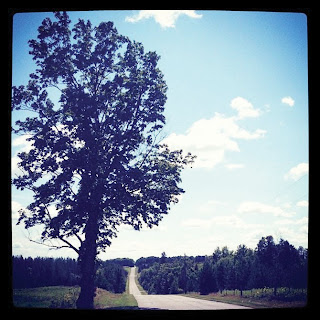 This writing marks the 24th edition of this column. When I started it in the June 14, 2012, edition of The BEE and Park Falls Herald, I had no idea what it was or where it was going. I distinctly remember going to Eric, the editor, a week or so prior and explaining to him that I had started working on a series of stories about my outdoor adventures, thinking it might fill some space in the Outdoors Section. What I was really looking for was an excuse to dig into something more creative and expansive than reporting high school sports. To my surprise, after only one round of revisions, words and thoughts that reflected myself on a personal level were suddenly being sent to a printing press, soon to be distributed to the entire county. Yes, it was terrifying.

In the following weeks I never assumed it was a given that what I wrote would go to print. I never took for granted that the piece I wrote stood the possibility of getting yanked with no prior notice or reason necessary, and it kept me on my toes. Every week I've tried to expand in a new direction, tried to really grab hold of some experience, no matter how big or small, and riff on it to the point of exhaustion. I have branched out into many areas, seeing how far I could take my mind wanderings before someone put the axe to this little project, before someone told me I was full of nothing but hot air and to go sit in a corner to wear a dunce hat. And yet, here I still am.

Part of the reason this project has been able to expand the way it has is because of its name (and when I say “expand” I mean morph into covering a broad range of topics). When I chose the title "Woodsman Enough" it appealed to me because it covered a few key points...
Read more »
Posted by Unknown at 6:00 AM No comments:

Email ThisBlogThis!Share to TwitterShare to FacebookShare to Pinterest
Labels: education, thanks, writing

And how they bend the truth: Part II


I was frozen stiff in fear, but I couldn't have run if I had the choice. After all, where was I supposed to run to? There I was in a cold, slippery cedar swamp, pinned between a river on one side and a steep hill and underbrush on the other. I was staring at the darkest, biggest, gnarliest looking lone wolf your imagination could possibly cook up, and I had nothing to defend myself with but my hands.

I wasn’t aware of it then, but thinking back on it now, I recall the biological response I went through when I realized my path had crossed with one of nature’s most perfect predators. Sure, all the normal things occurred - the hair on the back of my neck stood on end, my shoulders tensed up, a cool sweat broke on my forehead, but what I wasn’t expecting was for my hands to clench into fists, my spine to straighten, my legs to set themselves at shoulder width apart, and my facial expression to settle into an angry furrow across my brow. Apparently, within a matter of microseconds, I had subconsciously decided to fight a full-grown wolf with my bare hands.

The wolf’s fur was so black it seemed to suck light right out of the air. Its snout was blocky, set wide like it was almost deformed. The monster’s ears were wide and set low to his broad face, creating a permanent, menacing expression. His jet-black fur bunched around his massive neck was in magnificent layers, more like a lion’s mane than anything else. And the eyes. Oh the eyes.

They were gray, but not in a glowing, piercing, or aggressive way. No. No, these eyes were a pale gray, almost dull you might say. They were unimpressed, unthreatened, jaded. They were the eyes that had seen so much death, carnage, and horror that they hardly registered any of it anymore. These eyes were hollow, and in them, I was already dead.
Read more »
Posted by Unknown at 6:00 AM No comments:

And how they speak the truth: Part I

I was out for a morning in the woods with my camera and notebook, actively searching for some inspiration to take home with me when it happened. I had left my house early in the morning, right around sunrise to get the maximum amount of time in before the day’s duties could bear down on me. Since I had entered the woods, the falling snow had increased in both volume and frequency, creating a magnificent blanket of fresh white all around me. Many ideas had come and gone. Some I liked and tossed around in my skull, others I laughed at because they couldn't possibly go anywhere. I had come up with a good statement to make for this column -- then it happened and everything changed.

Maybe 30 yards from the riverbank is where I heard it. Down where the popple, birch, and balsam give way to thick nets of cedar and moss-covered boulders. Below the cedar canopies the snow was falling like sluggish rays of light, anywhere it could seep in past the high-up blankets of evergreen leaves.

“Crack,” and then, a pitter-patter of footsteps. Heavy sounding footsteps.

I froze and scanned my eyes through the vegetation in front of me. I turned my head, and then whipped it around as I heard another sound. This one was more like the sound of... of something hard scraping against a tree or possibly a frozen patch of ground. Perhaps it was a buck making a scrape, that sound. My eyes kept scanning and my ears were wide open. I realized my jaw was clenched tight, grinding the molars in the back of my mouth.

It was a deer, right? I was sure of it. Probably that big doe I’d seen in the meadow a few nights before. Right? Or maybe it was a young buck, fresh on her trail. The rut was in full swing; it made sense he would travel into her territory even during this wet snowfall.
Read more »
Posted by Unknown at 8:00 AM No comments:

To wear a hat 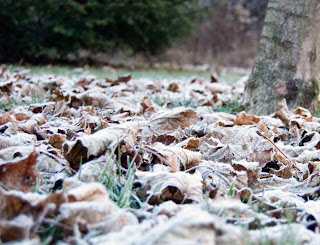 These days when the sun rises we're often looking at it through wet, dark, dead branches and blue-gray clouds that hang thick and heavy in a low, half frozen sky. The need to scrape car windows has become more frequent with each passing week, and through town, people's chimneys are piping warm smoke from wood stoves. By the time you read this, it will officially be November, and the crease of cold and darkness is only going to deepen from here.

This Sunday we end daylight savings time and turn our clocks back by one hour. The change will make our mornings darker but our afternoons last longer, at least for a little while. Unfortunately, by the time we get around to Christmas and New Year’s, there will be so little daylight left during our waking hours, that we'll hardly be able to justify getting out of bed for our ration of natural sunlight each day.

The fact of the matter is that this is what the onset of winter looks like in the Northwoods. It's not always such an attractive or jubilant ordeal, and some days I can't stand the thought of shuffling between work and home in the dark. I also tend to fall into the trap of letting the cold keep me inside more often than not, and that really dampens my spirits.

Over the past couple years I've learned a few new techniques to help dreary days, but first among them is simple: get outside. I have talked about this before, a lot, but the flavor and attitude of each season up here can't be fully appreciated without spending time outdoors. Now, in the summer, I'm all for running around half naked for 16 hours a day, seven days a week, but when it comes to these colder months, time outside takes a little more preparation, which is what I want to address this week.
Read more »
Posted by Unknown at 8:00 AM No comments: